The Swiss Federal Constitution of 1848 transferred operation of the postal service from the Cantons to the Federal Government, and in doing so identified the need for a stamp design that would symbolize the newly formed constitutional State.
A unified currency was introduced on 1 January 1852, with the Swiss Franc (100 Rappen, centimes, centesimi) replacing a multitude of former currencies. It was intended that the new stamps would be available at the same time, but, due to a delay by the Federal Council in approving a new issue, it was not until October 1854 that the country’s first mass-produced stamps appeared.

In late 1851, the Director of the Federal Mint, Dr. Kuster, visited Paris and London to investigate methods of stamp production. While at the Perkins Bacon plant it is believed he gained inspiration for the design of the new stamp from the allegorical figure of ‘Britannia’ on the first official stamps of Barbados, Mauritius and Trinidad.
Britannia is depicted as a seated lady holding a spear in her right arm and resting her left elbow on a shield. The pose is remarkably similar to that found in the design of the Strubel.
The first Federal stamps (Rayons) had featured the national coat of arms (in the form of the Swiss cross) in their design, and new coins were minted with the head of Helvetia (symbolic mother of Switzerland) on the reverse. The Helvetia motif on the coins was favourably accepted by the public and prompted the idea of depicting this allegorical figure on the new stamps. 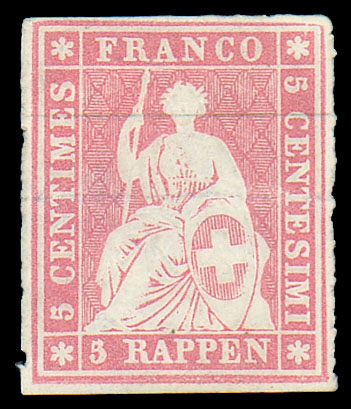 The stamps featuring the Sitting Helvetia were made using a letterpress printing process that was combined with uncoloured embossed printing of the stamp motif (Helvetia) and the text.
The paper selected for the printing of the entire Strubel issue is known as Dickinson paper, notable for the use of an embedded coloured silk thread running horizontally through the paper, and serving as an anti-counterfeiting measure. Occasionally, the thread is faintly visible from the front of the stamp, looking almost like a crease.

As yet, the stamps had no perforations, so had to be cut out of the sheet.

In many cases, the new stamps were not cleanly and clearly printed, so the crown of laurels on Helvetia’s head often appeared unrecognizable, looking more like a tousled hairstyle. It is the laurel wreath on the head, giving the mistaken impression that ‘Helvetia’ is pictured with unkempt hair, that gave these stamps the nickname “Strubel”.

The name is derived from a popular German children’s book Der Struwwelpeter by Heinrich Hoffmann, first published in 1845. Consisting of ten illustrated and rhymed stories about children, each story demonstrates, in an exaggerated way, the consequences of misbehaviour. The subject of the first story provides the title of the whole book. Literally translated, Struwwel-Peter means Slovenly-Peter.

So who is Struwwelpeter? 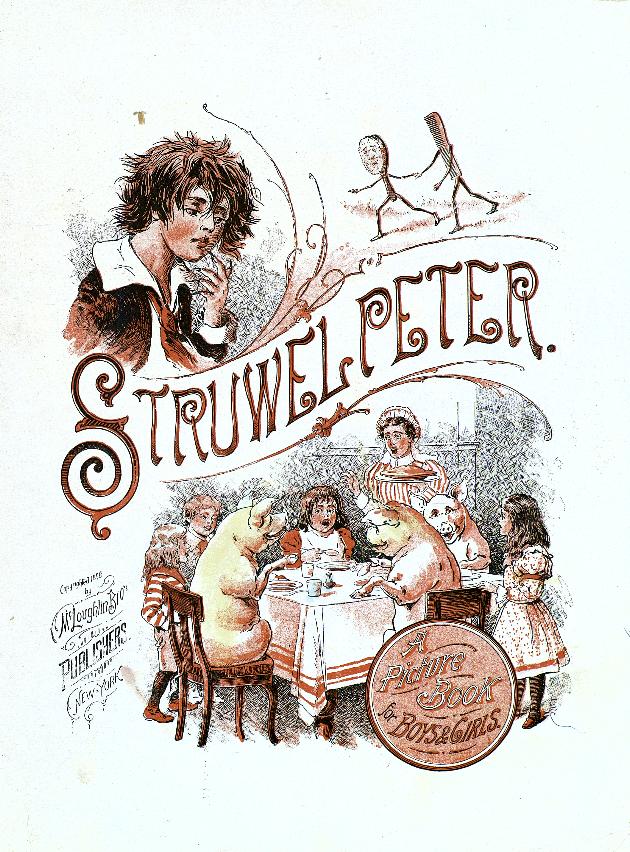 Taken from the German children’s book Der Struwwelpeter by Heinrich Hoffmann, and first published in 1845. The book contains ten illustrated and rhymed stories about children. Each story demonstrates, in an exaggerated way, the consequences of misbehaviour. The subject of the first story provides the title of the whole book. Literally translated, Struwwel-Peter means Slovenly-Peter.

The validity of the “Strubel” stamps began on 15 September 1854 and ended on 31 July 1863, when they were replaced by perforated stamps. During this period, seven different face values, ranging from 2 Rappen (centimes) to one franc, were issued.
The first “Strubel” stamps were printed in Munich, but later issues were produced by the Federal Mint in Bern. Over the years, the paper manufacturer and the colours of the silk threads changed. During the “Strubel” period, postal charges were also altered, as were the regulations for cancelling stamps.

As can be seen, during their brief period of validity, the “Strubel” stamps had quite an eventful existence, with different printing, paper, silk colours, uses, tariff rules and cancellation guidelines. Thus, it is hardly surprising that no two “Strubel” collections are the same. As a result, collectors are free to build up their display in line with their personal preferences.

A total of seven different values were issued in several printings between 1854 and 1862, ranging from 5 rappen to 1 franc. A great attraction to philatelists is the variety in types of paper and colours of thread used in the different printings. These aspects continue to give rise to debate over the correct cataloguing of the issue. The commonest is the 5 rappen brown on thick paper with a green thread of which nearly 10 million were printed. The 2 rappen grey and 1 franc grey issues are quite rare and of considerable value.

In later years, people began to criticise the design of the once beloved ‘Strubel’, considering it to be inartistic. The windswept hair of Mother Helvetia was likened to icicles – or even horns! She was devoid of expression – a blank face without eyes, and the suggestion was made that she should appear more in profile, as on the coins of the time.

A new design, again featuring Helvetia, was introduced on the 1st October 1862, but this time the stamps were perforated. However, this is another story, that warrants a separate introduction.
Watch this space!

Over the last 50 years, many articles have been written on the Strubel issue and published in the Society’s Helvetia Newsletter. Back numbers of this journal are available from the Librarian.

The Society’s Library also holds a number of reference books on the subject of the imperforate Sitting Helvetia (Strubel), including the following: