On the 12th September 1848, a new Federal Constitution was approved by the 22 cantons, thereby creating a centralised government to run the affairs previously administered by the cantons. An elected two-chamber Federal Assembly was established, and a Federal Council (the government) consisting of seven members with a rotating presidency.

With effect from 1st January 1849, the newly formed Federal Postal Administration took over responsibility for the postal service, until then operated by some of the larger cantons. Initially this consisted of establishing laws concerning rates and setting up the 11 postal districts that were to run the entire operation.

At this point, the administration did not manufacture any postage stamps and two of the cantons, namely Zürich and Geneva continued to produce stamps of their own for another 15 months (the Transitional Issues).

On the 5 April 1850, the Federal Council made postage stamps available to centres of large population, to be used as pre-payment on letters. These stamps were the 2½ Rappen “Orts Post” and “Poste Locale”, featuring the cross of the newly formed Swiss Confederation, and lithograph printed on white wove paper by Karl Durheim of Bern.

Forty types were hand-drawn on a stone (printing plate), arranged eight horizontally by five vertically. The forty types were transferred from the stone and repeated four times, occasionally twice, producing sheets of 160 or 80 stamps respectively.

Occasionally, the frame surrounding the cross shifted by

as much as 0.5mm and proved quite troublesome for the printer. In June 1850 both stamps appeared without the frame around the cross. The frame was removed from the original stone, but often not completely, so partial frames do exist.

The Orts Post and Poste Locale were issued to serve in the German and French-speaking areas of the country respectively. However, both issues were used across both areas. These two stamps, having a low value, were issued for local use but were also used for greater distances when adequate multiples were placed on envelopes. The higher values that followed were designed for different rayons (postal zones), depending on distance from the despatching post office.

In 1849 the postal rates in Switzerland were fixed according to classified distances, measured in “wegstunden” (way hours) and known as Rayons (postal zones). These were in addition to the 2½ Rappen local rate (Ortskreis).

The weight of letters also had a bearing on the postage rate. On 1st April 1850, a circular from the Federal Council, announced that prepaid letters would be carried at the following tariffs:

The circular went on to state: “Stamps of 5 and 10 Rappen will shortly be issued; these may also be used for the local post in such cases.” On 1st October 1850, the dark blue Rayon I and yellow Rayon II issues were placed on sale.

The Rayon I stamp was printed on white wove paper in black and red on a dark-blue background. There were several shades, the grey-blue background being the most common. As with the Orts Post & Poste Locale before, this stamp was initially printed with a black frame surrounding the Federal cross. With later printings it was erased from the stone.

The Rayon II was also printed on white wove paper in three colours, black and red on a yellow background. Examples of this stamp with frame around the cross are extremely rare 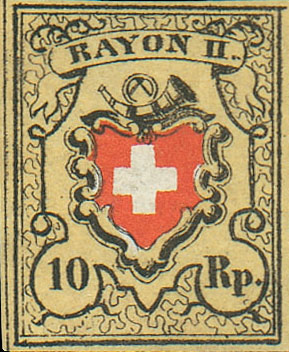 Forty types of Rayon I and II were hand-drawn on a stone (printing plate), arranged eight horizontally by five vertically. These forty types were transferred from the stone and repeated four times, occasionally twice, producing sheets of 160 or 80 stamps respectively.

The first two issues on a dark-blue or yellow background proved very expensive to print, and so, in September 1850, a request was
made to the printer to run trial colour changes on the existing plates. The Rayon I was changed to light blue on white paper with a red shield, and proved successful. However, when the Rayon II was changed to yellow on white paper with a red shield, it was not clearly visible in certain light and so the proposed change for this issue was abandoned. 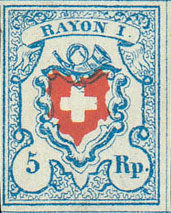 The date of issue for the Rayon I in light blue is believed to be the 30th March 1851, although the earliest known cancellation is dated 15th April 1851.
The Federal Council were planning a new series of stamps, the imperforate Sitting Helvetia, with silk thread, to be ready for distribution by 1st January 1852. However, due to the complicated process of producing these stamps, the engraver, Johann Weiss of Munich, was unable to supply on time.

This delay resulted in the authority’s decision to continue with the Rayon I and II as prepayment for the first and second postal zones and introduce an additional stamp with a value of 15 Rappen for a third rayon, representing a greater distance limit.

The first Federal Coinage Act was approved by the Federal Assembly on 7 May 1850, establishing the franc as the monetary unit of Switzerland, replacing the different currencies of the cantons.

At the time, there was a discrepancy between the values of the centime in the French cantons and the Rappen in the German cantons. To create parity between the two currencies a changeover was arranged for the 1st January 1852, and to ensure a smooth transition, no stamps were sold at post offices between 25th December 1851 and 1st January 1852. 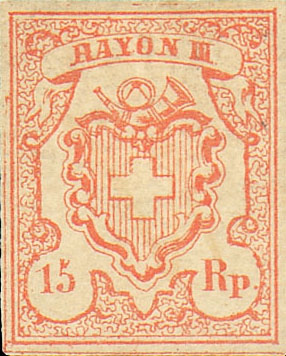 This stamp was intended to be in red and black, but was actually printed in red only. The value in the lower left circle of the first issue was inscribed with a small 15 and a currency identifier of either “Rp.” or “Cts”.

Mid-way through the year the currency identifier was standardised as “15 Rp.”, with the value changed to a larger figure. These issues are described as either “small 15” or “large 15”.

All of the Rayons were declared invalid on October 1st, 1854, when the silk thread issue of the imperforate Sitting Helvetia was placed on sale. 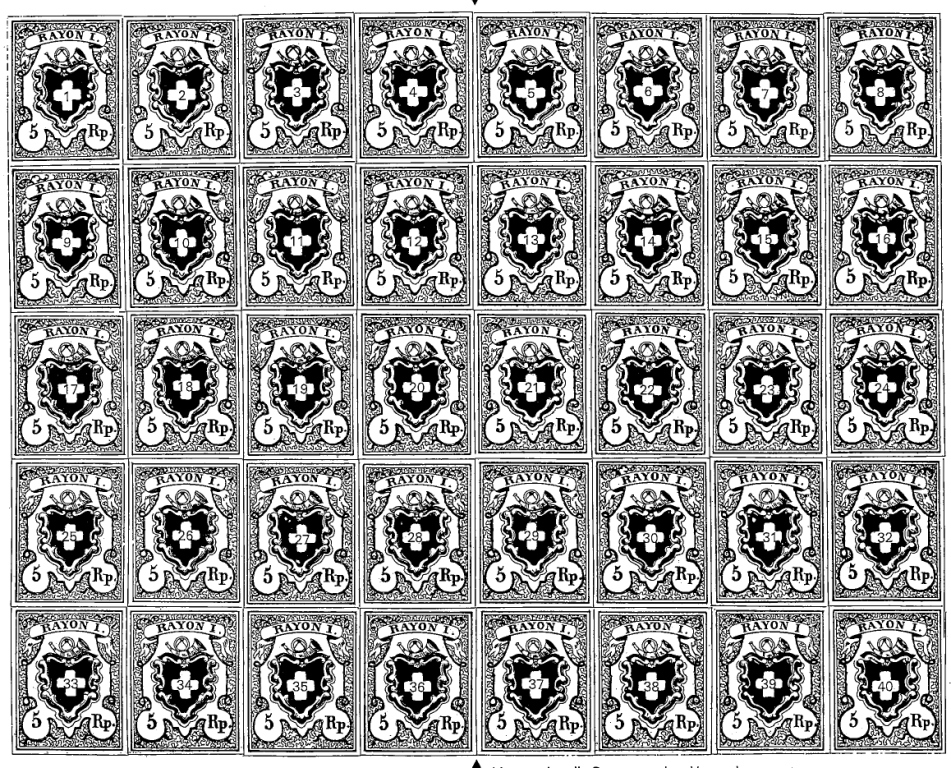 “Rayon” stamps of the 1850 to 1852 period were printed by lithography, a process which required the designer to individually draw each stamp onto a printing stone (or plate). This he did 40 times (in blocks of 8 stamps across by 5 stamps down) for Ortspost / Poste Locale, Rayon I and Rayon II stamps, and 10 times for Rayon III stamps (2 x 5 stamps), with inevitable slight variations for each of the 40 (or 10) stamps, resulting in 40 (or 10) ‘types’.

Many collectors of the classic Swiss “Rayon” stamps like to reconstruct these blocks of 40 types (or 10 for Rayon III). To assist them with accurate identification, we have reproduced here the Type Tables for the three most attainable Rayons, to help determine the ‘types’ of stamps in their possession. If a stamp does not match any of the ‘types’ in these Tables it is likely to be a forgery.

Further details about these Rayon ‘types’ will be published in the Helvetia Philatelic Society Newsletter (HPSN), commencing with the July 2014 edition. This newsletter is available free to all members of the Society.

We are grateful to the Schweizer Briefmarken Zeitung (SBZ), and to Zumstein, for allowing us to reproduce these type tables from their respective publications. 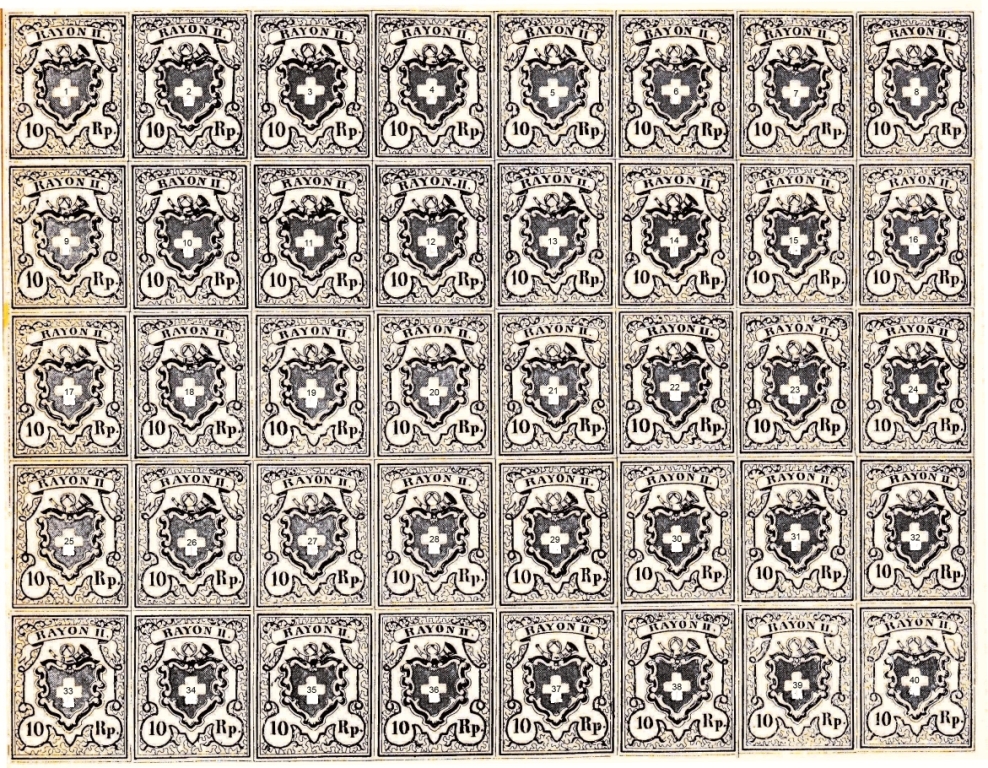 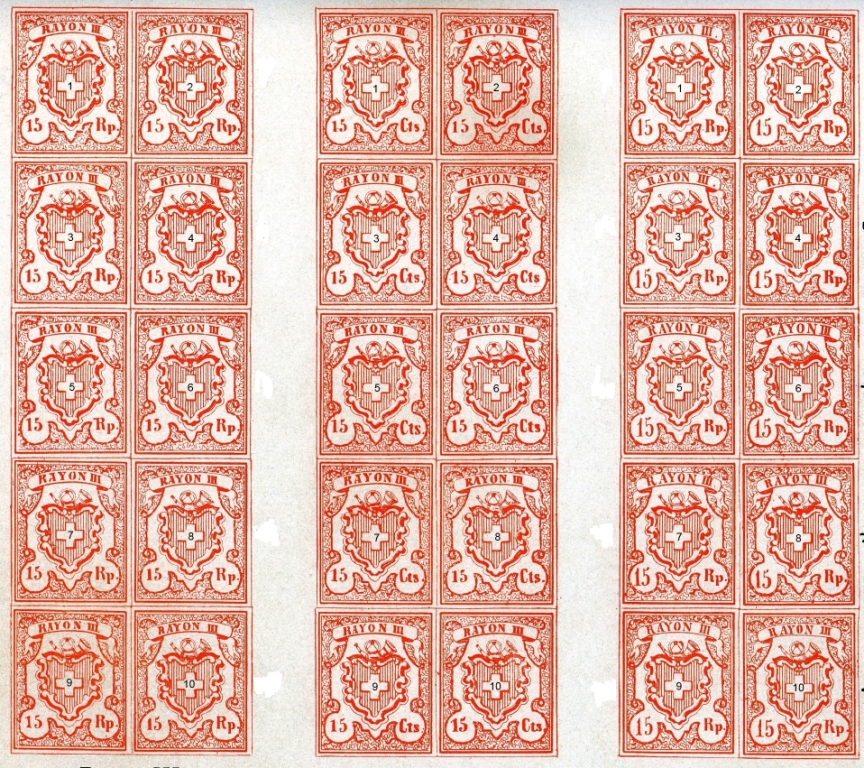