The first stamp to be issued by the Geneva Post (Switzerland’s second stamp issue and only the fourth stamp in the world to be issued) resulted from a speech before the Grand Council of Geneva on Monday, 22nd May 1843, by Alphonse de Candolle, professor of botany and council member.

Referring to Great Britain’s success with the adhesive stamp in 1840, he spoke of the advantages of selling stamps as receipts for pre-payment of letter postage, for example:

On the 13th September 1843, Professor de Candolle’s proposal was approved. However, two other recommendations were not adopted. de Candolle had suggested that stores all over town be authorized to sell the stamps, thereby saving trips to the post office for many people. This idea was rejected on the basis of the complex postal rate structure existing at that time. Ordinary shopkeepers could not be expected to keep abreast of all rates and changes. A proposal for lower postal rates was also rejected, leaving the local rate at 5 centimes and the Cantonal rate at 10 centimes. The unique design of the stamp, described below, provided for both rates. 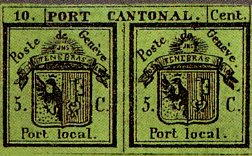 The stamp’s designer is unknown but believed to be Guillaume Pasteur, Director of the Geneva Post at the time. The stamp was printed with black ink on yellow-green paper by the lithographer Charles Alphonse Schmid, in sheets of 50 doubles. Total printing was 1,200 sheets or 60,000 doubles of which only 6,000 were ever used and only about 600 preserved.

The inscription over each double-stamp indicates “Cantonal Postage 10 centimes”, i.e. the rate for a letter from one city to another. Each half-stamp bears the inscription “Port local” (local postage) with a value of 5 centimes.
There is some controversy surrounding the first day of use for the Double Geneva. The Zumstein catalogue records the date as 1st October 1843, but that date was a Sunday. Philatelic experts believe the actual first day was Saturday, 30th September 1843.

Public Notice 77 of Wednesday, 27th September 1843 recorded the 30th September as the day of issue and gave instructions for purchase and use of the stamp. It was to be sold only at the post office and, as a special favour to Professor de Candolle, at a paper shop near his home on the north side of the river.

The public were slow to accept the stamps; very few franked letters are known from late 1843. In an attempt to encourage prepayment of mail, the post office decided on 6th February 1844 to sell the 10 centimes double stamp at 8 centimes and the single stamp at 4 centimes. Unfranked letters were still charged at the normal rates. This action saw a marked improvement in the sale of stamps during the rest of the year.

Throughout 1844 postal rates were the subject of continuing discussion. On 11th January 1845, M. A. Barde, President of the Finance Department, proposed that the rate for cantonal letters be reduced from 10 to 5 centimes. He expected an increased volume of mail to more than compensate for revenue lost by lowering the rate. The Council adopted his proposal and established uniform letter rates for the Canton, rates that for the first time took into consideration the weight of a letter. Effective on 1st April 1845 the rates became:

This resulted in the abolition of the ‘Cantonal Post’, and the double-stamp became surplus to requirement. However, the “Double Geneva” was not declared obsolete at the time. Although it was no longer sold by the post office, private stocks were used, either as halves for the new 5c postage rate, or as doubles for heavier letters until 1853.

A new stamp was proposed by Postmaster General Pasteur, to be similar in design to half of the double-stamp but slightly larger and bearing the inscription “Port Cantonal”. The lithographer, Charles Schmid, printed the new design in black on yellow-green paper. The stamps, called the “Small Eagle” because the eagle’s wings do not reach the edge of the shield, were laid out very close to each other on the plate, sometimes touching the next stamp. Because of this copies of the “Small Eagle” with four full frame lines are very difficult to find. A total of 1,200 sheets of 100 stamps or 120,000 stamps were printed. The stamp was in use from 1st April 1845 until the end of 1846.

Towards the end of 1846, before the supply of “Small Eagles” was exhausted, the lithographer made a new plate

with a slightly different design. In the new design the wing touches the frame of the shield, resulting in the stamp being called the “Large Eagle”.

First known use of the yellow-green stamps is 6th January 1847. The lithographer’s records indicate that the dark green stamps were delivered to the post office on 2nd August 1848 and this is generally regarded as the day of issue for the stamps. All of the cantonal stamps were valid until 30th September 1854.

The Society’s Library holds a number of reference books on the subject of the Geneva Cantonal Issues,
including the following: